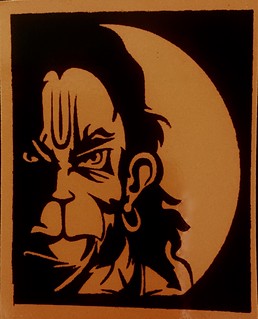 Here in Mysore, the two big god-towers are covered in scaffolding. Deconstruction time. Chamundeshwari Temple on the hill, and Philomena’s Cathedral in the middle of Muslim town: you can linger on the grounds outside each, but the inner sancta are covered in dust. The gothic awe you’re supposed to feel as you lift your head and release the soft palate, gazing up at the spires, has been replaced by a neo-noir vision: caged churches rising out of human ruckus.

From halfway up the Chamundi Hill stairway you can stop and look down on Philomela’s in the distance, a pile of hazy hash tags out there on the valley floor. I tend to climb the Hill on rest days with friends, and go to Cathedral alone on hot weekday afternoons. Philomela’s catacombs are cool and evil. The walls are etched in thousands of names, European names, a record of violence and colonial memory. Big donors, I suppose. I dig my fingers into the grooves of the familiar surnames, re-archiving some of their black grout-dust under my nails. How do you get here from the teachings of Jesus? At the lowest point of the catacombs, there is a Rube Goldberg situation where you can roll rupees down a ramp, through a fence and under a Philomela mannequin in to some kind of secret bank below. I usually send Philomela a fiver.

On the new moon I climb Chamundi with a friend who is 13 years old. At the top we circumnavigate the scaffolded temple. Middle-aged men in joggers do push-ups behind the building, and a bull chews plastic in a pile of trash. There’s a rikshaw with one of the new Hanuman decals, a menacing orange half-face in an oval. She says he looks like a demon.

I agree and mention the super-demon Ravana. Hanuman setting his tail aflame and swinging it through Lanka like numbchucks, burning the demon city to ground and springing sex-trafficked Sita out of captivity. One of us free-associates from there to Jesus in the temple, his divine rage at the money-changers. Then we jump back to Hanuman’s clarity (Ram doesn’t know himself as a god, but his buddy Hanuman can spot the play of Vishnu on contact). Then we note the awkward moments in Hanuman’s devotion. Monkeys do funny things.

The idea of the divine having many faces would have freaked me out at 13. But the planet is growing smaller and time is growing shorter. Those facing superdemons need all the resources we can muster, and god knows Hanuman is one. On the drive home from the Hill, I sing his song in Hindi. Like any poem with power, the Chalisa is a spell, and this trip I’m learning its forty verses by transmission over forty days. That’s also the duration of Jesus’ test in the desert (and thus of Lent), Moses’ on the mountain, and of kundalini repatterning rituals. Forty days seems to be is a base metric in philosophical time, maybe because that’s the time it takes a nervous system to burn out a nasty samskara, or to build a new one.

In other words, for better and for worse, 40 days is the duration of normalization. It is in itself a spell. We must be so careful about that now.

Now I’m recovering an ability to name delusion. To name evil. We are facing serious sub-cultural taboos and blocks here. (Consider the whole “see no evil” trip, which is a great insight for a different epoch.) I will return home after 40 days and then some less shy about naming psychopathy, and seeing ecocide for what it is. This rests, for me, in a practical everyday commitment to feeling intimately the delusion, and the capacity for going to the dark side, within myself. Feeling it, and not acting from it.

The sweet side of this is resting in the heart motives and letting them cultivate themselves. Adoration, gratitude, compassion, courage. That’s my shortlist-of-the-spirit anyway. Simple, not simple.

Svoboda says America is now “Rahu world” – the nation such as it is has entered into an epoch (dasha) of special delusion – the kind in which ideas are detached from bodies. Hate and lies are empowered. So, those who get energy from hate and lies rise up. It is extremely easy now to be deceived. Time gets scrambled. And, in these ethers there is also room for rapid growth for those who are cultivating the mental clarity and emotional honesty to work with delusion directly. Viveka – the ability to cut through delusion – becomes the central skill.

For years I studied the history of epic social change, wondering all along about human love in times of Big Crazy. What forgotten beautiful connections have pairs and small groups lived out while their societies upheaved around them? Persecution, financial crisis, plague, extreme weather must always have contained within them humans’ secret devotion, heroic risks, epic sacrifice, character-defining courage. When times change, stuffy social norms drop away. Good people stop investing energy in self-promoting agendas. Connection and creation accelerate.

Maybe it’s like what happens when you make your own death a contemplation: love and joy and meaning amplify. You’re so much more alive in every moment. Keeping endings close to mind, if it’s done in just the right way, can be the most edifying and beautifying force for life.

Quieter than the crazy fear and anger, I suspect that all along and everywhere the heart motives have set a secret tone when lies and violence have appeared to surge. Adoration, gratitude, compassion, courage. No wonder so many people are crying at random. Let’s not say we are mourning. Let’s see that hearts are on the move.

I leave America at New Year’s, as that country enters the Upside-down. All the demons crossing over from the dark side, showing themselves, going in for their kills. Our planet is so small – 35 hours of travel and I’m on exactly the other side. There is usually much psychic distance between India and Michigan, but not now. All poles are present; all developments are happening now; everything counts to me as real. I do what I can with the limited mind I’ve got, and with the years of preparation the yoga cave has given it. All our caves – these have been perfect staging grounds for what could be a bumpy ride.

Halfway to India, there is freezing fog at Charles de Gaulle. The pilot keeps explaining the weird weather as we roll along the tarmac on the 5:25 arrival from Detroit. The ground next to the runway looks like stalactites under billows of dry ice. Why is there no sunrise? Why does the ground have teeth? He says it’s just the freezing fog.

For a decade, the last day of the year has usually begun here on a plane. Seeing first light over Paris as we land. And then, another long-haul and 4 French films later, I’m fast-forwarded into the next day’s sunrise on the Mysore ring road. First light hits just as we drive under the aqueducts. By this point I’m always euphoric. I’ve consumed nothing in 2 days but Emergen-C and two quaffs of jet fuel, and now I’m back inside this city I love.

My brother nicks my old ipod each Christmas, curating sound for the new January. Offering my consciousness a medium in which to temper new experiences, and to deposit them deep in my tissues. Soundtrack : zeitgeist :: ghee : spice. I let him choose the annual mood, as long as he always leaves the Jayashree and the Jack White. Usually he offers a swath of new electronica, though one especially good year the soundtrack was Middle Eastern hip hop. Another year, it was just a funny-brutal Bollywood/Hans Zimmer shuffle. But those times are done. The spirit of this trip is something else entirely.

This year, I’m looping Arca’s Perdida when we reach the Mysore aqueduct. My airplane-addled mind invents original lyrics. This life is not forever. This scene is not forever. I will remember this light on the day that I die.

It’s true. There is no more waiting to see what will happen. Climate change is here. Economic change is here. War is here. Evil – not that evil is so shocking – evil is here. But also, peace backgrounds almost every moment if I’m awake for it.

Thirty-eight days later, that’s today, I’ve logged many many new hours of cranial-sacral therapy practice. Dwelling in this work is a gorgeous way of living out my evenings in this place, when the light is gold and everyday sounds take on the quality of a movie set. Like they’ve all been assembled for effect. Maybe later, words will surface around what this season of the cranial practice has taught me. For now there’s just a weird lot of stillness. There is something extremely subversive about the stillness…

By stillness I don’t mean the moments when the evening light, or a blank spot in the mind, presents itself just right and generates a nice aporia. Rather, this stillness is a marked physiological-perceptual moment when the constant tiny movement of the spine just. Stops.

This is potent as hell. Holding the paradox of human violence and absolute peace, both being the case, neither having monopoly on my mind. Mysore mornings and evenings, the adoration of them, are written in to me now. When I die, I will re-experience their numinous nectar-memory as the light leaves my cells.

This timeplace will be my arca perdida. One among many.

It is so tender.