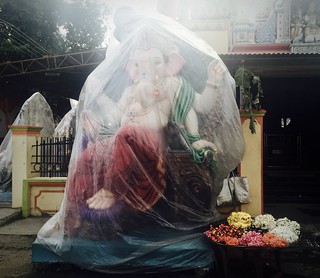 It’s a time of contradiction. I’d say paradox, but paradox is cute.

Watching America from India this winter was like seeing a glacier calve on the internet: rumbles in a little box on a screen, representing a centuries-old formation melting all at once into the sea. The bureaucratic shock-and-awe swallowed up my words.

This week it was a bumpy transition from India to Michigan. An emotional goodbye to Mysore, with uncertainty about when or how the Ashtanga scene there will resurge. Two long haul flights, 12 hours’ rest at home, then back in to teaching and running a yoga school. My bones are still glowing, but the flesh is in pain. My emotions are high, but the mind’s a little scrambled.

The internal weather system was like this. It’s the end of the hardest practice trip I’ve ever made, and by far the most peaceful and loving. Some ego-programming has been brought to light, and I’m not the same person I was. I’m less hopeful; more just generally in love. Less buoyant; way more michievious. More accepting; but super- impatient with mediocrity. I’m filled with love for my friends, coursing in profane delight about indomitable spirits and the forces of nature, trying to tap these strong emotions down into sattva. Unusual phenomena, all of that.

So, America. It looks worse up close: what it looks like is the massive flatbed trailer trolling the university campus, covered in anti-immigrant, anti-woman signs and possibly guns and knives (there are sharp objects and streamers, anyway) while blasting Born in the USA. Yet somehow America feels better than it did from India – it feels like a lot of people being honest and brave and caring for each other. Mining trauma for purpose and verve. It’s fascinating. America 2017 is one epic backdrop. One would have to be so white to deny its immediate evil. And one would have to be ignorant of history to pretend it’s all gonna be ok.

Back in Mysore, the shala is also epic in its way. Take 300 intense/disciplined people from around the world. Teach them the same rarified movements, and the same half-whispered legends. Put them together in a pressure cooker. Doing the same actions, in the same place, with the same people every day. It’s a toss up: one either (a) turns into an asana-bot, bent on whatever arbitrary objects signify status in this scene (attention, postures, start time)…. or (b) one does some yoga. Status-acquisition and learning yoga are competing motives.

In Mysore, weirdly potent learning happens when life gets mixed up in the method. Like this. My teacher stops class to make an example of someone’s bad attitude. Or that person you used to get along great with shows up, but now for some reason he makes you self-conscious and not in a good way. Or some uncanny coincidence befalls you, as they tend to do inside a vortex, and suddenly you understand it as an omen. Or old memories or emotions you haven’t had time for surface with a vengeance, and you’ve got no choice but to ride them out. This is studying the self to forget the self. Studying the old story to forget that story.

It’s awkward. Awkwardness being the ricochet of self-wareness within the boundaries of a self. It leaves an impression. A dear friend says, “My practice is between me, my teachers, and god.” I feel the same, though now my practice is between those parties plus my students. And apart from just breathing around them, one way to get my expreience across is through these capsules of memory. Through the stories that practice brings up.

It’s hazardous. But I think we can learn how to make meaning deliberately rather than habitually. It takes originality, strong values, and a strong mind. During retreat, we get repetition and random chance and relationship and and synchronicity; and with these raw materials some start figuring how to construct symbolic universes and spiritual pathways. Then we go home, and we either merge back into a mainstream that says build yourself up, consume, and act normal, or we do the creative work required to live by a more interesting code. We decide to work for something other than fame and power and highs and money. We tell better stories. We create culture.

On practice retreat, my teacher uses my awkwardness (as defined above) a lot. It’s systematic and brilliant. I’m left with so many memory-capsules I could turn in to stories if I wanted. And with these, privately, carefully, I stitch together a learning process that will hold me stable in this insane world.

Nihilism is thrumming in the background here in America. Out of that you get exploitation, relationships in which it’s ok to use people, work based on short-term gain. Intellectual subtlety is decreasing; crappy aesthetic taste is increasing. Popular culture tastes like carrier oil for elite domination, white supremacy, and patriarchy.

So it’s gonna help to be able to make meaning on scorched earth. Construct symbolic universes that can stand over that which is stupid and flat. With subtlety, secret kindness, and the sort of truth that has nothing to prove. Because my God more now than even we need a counter-culture. I don’t know who better to talk to about this than semi-nomadic yoga people who eat mostly seeds and chant to Patanjali.

I’m tempted to drink on the weekends. I’m tempted to sit with my neighbors and smoke my face off in the afternoons. That’s the background nihilism getting into me. What practice gives, in addition to the knowledge of how to make meaning out of nothing, is access to the other altered states – those that bring perspective. Sitting practice. Ironic prayer to no one and everyone. Time in the forest. Reading history. Singing. Breath. These are a different direction of relief – consolation through perceiving more of the present moment, not less.

Madness is present. If I stop being nihilistic, then the madness is fascinating. How many people have you witnessed in psychotic break already this year? How much collective confusion has clouded meetings and organizations? Meantime the thoughts of a super-concentrated mind are nothing less than spells. For the people with a practice, the intentions and motivations we cast out will help determine the world. I’m not joking about hacking one’s way to a higher mental clarity. This feels more than ever like the time to guard the awareness, and to nourish it like mothers, because there are ways in which awareness is all we’ve got.

Another contradiction. What I learn through practice is so specific. But also impersonal. The habit patterns of the mind, the tricks it plays, the longings it rests in.

And sometimes the perception of that is just the illusion we create out of our longing. There’s a lot of this in the student-teacher relationship, and in the relationship to spiritual leaders and politicians. This longing for the perfect parent.

So with the yoga, it’s great to leave students alone if they’re going deep inside themselves. To back off instead of reminding them you’re there. Sometimes practice has to be impersonal. Teacher’s pet energy comes on in us so easily – that longing for the special connection. I studied it in myself but had to teach for a couple of years before I could see that sometimes I still get played. Students are wonderful, but it’s not helpful to let things become so personal.

I’ve also learned to scan for the “specialness” vibe in groups. Charisma is a property of a crowd, not of individuals (Max Weber first said this). Strange things happen when people gather before a stage. People who speak to groups know this – a few obsessives in a crowd, trying to make a special-secret connection with the speaker, will affect the whole room. This is where academic divas come from, and also celebrity yoga teachers. Teacher’s pet energy is “you see my soul,” or maybe “I’m your special monkey.” No. Everyone is a special monkey. There are no special monkeys.

More than once here at home, a student has joked that they’d like to practice with a bag over their head, to cut the self-obsessive delusions that the practice was building up. (This request delights me, but I won’t let it charm.) Charlie Brown style.

Ok, yes, but only if your bag is not special. Only if there is a pile of bags at the door. Touch the threshold, bag yourself, touch the threshhold again when you leave, and bin the bag.

Only problem is, sweaty paper sticks to your face when you’re heavy-breathing. (Tried.) How about if we do it like this. Every one gets the same costume. A body. Without a bag. Without a bag for now.

But that’s a bag too. Sometimes you just have to show up and be a self in some life postures. The awkwardness of being in the world is great for those of us who think we can do everything in an invisibility cape.

The funny thing is, yeah, when we joke about practicing in paper bags we definitely understand each other. Life, death, breath, eyes, energy, love, adoration, gratitude, longing, laughter, yes. That’s it. We all get it. That’s having a self. It’s just the madness that doesn’t understand.

I grew up on a ranch in a rural red state, and drove in to a nearby city to attend high school. At school, there was one French class, an elective, attended by kids who could perceive and appreciate certain things I could not. “That high culture is not for me,” I thought wrongly, along with just about everyone else.

Each summer the French students had an opportunity to go on a group trip to Europe. While the rest of us stayed home and drove combine for the summer, or worked construction, or babysat. I clerked at the video store, and gardened rhubarb and zucchini.

The French kids would come back from Europe obsessed with cwoisswants. They didn’t know, like the rest of us, how great it is to drive an F350 on Montana back roads, to skip school and ski the headwalls of Beartooth Pass for free, ride 4-wheelers through pastures after a thunderstorm. Maybe cwoisswants are what you long for in Montana when you don’t have a taste of your place’s own wildness and luxury.

Or maybe I need to step away from the masala dosa. Step awaaaay from the story – the parts of the zeitgeist that are killing us. Step outside of the self who is overwhelmed by this new reality. There is a slight reconfiguration of my being in this world, and a trans-valuation of my values. In these times how could it be otherwise?

We live in the most interesting times. All the more reason to make them interesting on our own terms.