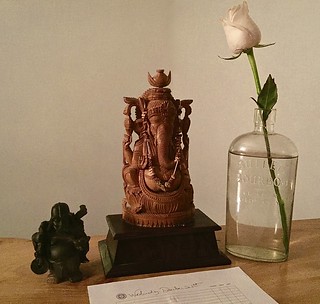 Mircea Eliade called his book Yoga: Immortality and Freedom. In other words: Samsara, I got this. He was the first westerner to do serious scholarship on Tantra and Hatha Yoga and, surprisingly, Immortality and Freedom still reads as fairly sensitive respectful writing, able to half-transmit ideas across the gap from Indian to Western and ways-of-knowing. Here is Eliade’s one big idea at the end of all that work: yoga is technology that enables people to tolerate living in history. Yogis live in the world and in time, without being totally defined and defeated by those two conditions.

When I first read it I thought he was confusing yoga with Heidegger, but now I don’t know. The ten years since actually have been an exercise in “being in time” through yoga. Getting as clear as possible about what our collective historical moment really is, and thus taking action in this particular time, in this particular body.

Allright already, Samsara. I see there is no cave to escape to, no alternate universe, no next planet to colonize, no altered state of consciousness that makes this moment go poof. This, right here. This is the kind of freedom we get.

Freedom, if you can call it that (and Patanjali would not), arises from aliveness in time. The new year is not going to make climate change and racism go away. But some of us care about all that is vulnerable. If so, more strength and more love and more clarity will be required. Spiritual bypassing is a way out of this historical moment, but that ain’t yoga. Yoga is being and acting with consciousness in the time that we have.

Dark things are going down on this particular planet, and for now we are in it together. My heart melts when I contemplate the self-destructive power of my species. Petty disagreements and the need to be right fall away. I am not right. My whole species and I are wrong. Clarity on this feels like the way of love.

Alternatively, there is the way of domination. Here in Mysore, even though I’m not on instagram and miss 99% of my twitter and FB feeds, I feel in our human collective a strong pull to leadership that reproduces the zeitgeist. What does leadership look like in 2017? Collect followers and dominate their attention. Place yourself at the center. Shrug off accountability. Rule the internet. Why? Because leadership is not service in 2017; it is the position from which you suck another’s milkshake. Authoritarianism has a yantra – it is the shape of the Matrix. The power is at the parasitic center; everyone else gives it their own life force in the form of consciousness/attention. This is rulership, which is the opposite of energetic transmission. No problem. Yoga is full of tools to systematically train ourselves out of the inherent human weakness that makes us want to give our power away.

It’s so clear, now, that the many of us who teach have a responsibility to empower students. There must be a hundred ways to do so. Here are three…

(1) Ask them to learn lie detection, to use their brilliant bodies to sound out the deceptions coming their way. This is a little bit of freedom.

(2) Seek accountability in a subculture that says all that people on a growth-path need is praise. See if embodying the way of accountability doesn’t have an effect on those we work with. Might be radical.

(3) Suggest that we all learn to love privacy, to love spiritual practice that is for nobody but oneself, that has nothing to prove, that is more real for the fact that it is not advertised. Show by example that the most epic lives are the ones that never get documented. Really, let us all discover (or remember) the ways of being alive that are just too damn cool to need to be seen.

And therefore too cool to be archived by the NSA. Hi.

Here is where I’m focused in these times – on clarity, beauty, and care for others. I feel strongly that I must keep a line on the ecstasy of the everyday, or I will lose my feeling and energy for life-in-these-times. So my program for this year is one part beauty in everyday things, two parts love over fear, one part building a better bullshit filter.

What interests me is yoga as a tool for getting us through. But also, the I think that maybe we can get yoga through. Our practices could be just another casualty to a way of life that is ending. Or yoga may get stronger when it’s more punk. Because historically it’s been the shamanic outsiders who found their way to so-called “Immortality and Freedom.”

It is 10 years since I started writing in this space. My academic advisers complained that my papers were suspiciously well written (science should not rhyme), so my brother made a blog to channel my frustration with that system. Blogging stopped being a thing, and 5 years ago I began putting all my creative energy into teaching yoga, but this remained as a practice space to keep me in relationship with the written word. Publishing as accountability.

It is 7 years since I moved from Los Angeles to Michigan. We did a solstice gathering at the shala on the 21st, and that anniversary hit me hard. We have done some things together as a shala these 7 years. A year and a half ago, I started sharing about that process here, because I felt a paradigm shift was coming, though I didn’t understand how hard and how fast. The shala model that we evolved on the outskirts of America’s first broken metropolis (Detroit) is post-capitalist, post-celebrity, and pro-community. It is survivalist, in an extremely abundant and relaxed way. It is an ecstatically connected social nervous system. It is a source for safety and care with the capacity to nourish great strength in any sort of challenging time.

In sum, it is just a student-driven yoga school. It’s an organization designed for a future in which there are – thank the gods of creative destruction who are upon us – not so many yoga stores.

Immortality and Freedom? I don’t know about that. What I can articulate is “decouple yoga from capitalism” (a taste of freedom) and “use yoga as a centralizing force for intelligent life” (an experience of being part of something much bigger than oneself).

The chapters of the shala cookbook are as follows.

Those are my trade secrets. I’d love for you to use whatever’s useful. The time to do so would be now.

And, now, I’m a little lost in this space.

Sometimes someone emails to say “please write about x.” That is exactly where the cookbook came from. I am not an initiator and never have been. I respond to the right kinds of invitation, and initiation. (That’s not unfeminist, it’s just one of the weird truths self-study has revealed about this self’s particulars.)

If you’ve been reading here a while and you have one of those “write about x” inclinations, please respond individually to the newsletter or say something in the comments. I am open to questions I can’t answer. And really to whatever unexpected idea arises from you who have some relationship with this particular – changing – voice.

Love, and thank you for forgiving my awkward moments over many years, and for enabling me to be a little useful at times. Bring on the New Year. X0v0