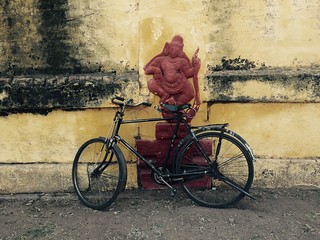 The last day in Mysore starts with morning practice, and ends 40 or 50 hours later on some other continent. I’m 22 hours into this vata-deranged trade between time and space, on a flight from Bangalore to Paris. No complaints.

But, burn this much of Earth’s resources in one go, and the human body will index that environmental cost one way or another. For me, even with a three-day intermission on the ground between the long-hauls, this trip will scramble my subtle body a bit. May as well embrace it. After led this morning I took a triple-chai, double-dosa breakfast with Mysore fictive kin. Then used it to fuel a morning of shala business as the arrows of my attention reorient to middle America. Edited the contents of the trunk, then had the local salon cut off the hyper hair growth brought on by so many hours of castor oil on the crown.

In the late afternoon I just drove around town, dropping what was left of my coins at temples and coconut stands, saying goodbye to the city. Last stop was Saint Philomena’s cathedral, to tremble before a cardboard diorama of Jesus lit by corroded circus lights. The set recalls early commercials for the Microsoft operating system – cartoon blue skies and green hills on paper glued to cardboard. Except there is a crusty muffin or something floating in the sky above Christ’s head, and plastic minigolf grass in the floor.

I’ll be at Notre Dame tonight in Paris but it won’t move me like Philomena’s, where I see all the frailty of religion on the surface – the artifice, the tackiness and decay. Nevermind whatever accidents of history landed a full-on cathedral on the boulevard out of Hindu Mysore into Muslim town. This place makes me sweat and shudder with recognitions, acceptance, and a feeling of emptiness. But in Europe, my defenses will rise like the buttresses and I’ll go into cool architectural appreciation mode. It is so funny what shakes free the remaining defenses around my spiritual heart… and what does not.

I had to gut-reckon the Muslim sector to get to Philomena’s today, because the usual road is closed. It feels amazing, to be a little bit integrated into the organism of a city. I watch quicker studies intuit this stuff on contact, but I had to WORK on tapping the order in the chaos. There have been trips here when I went out every evening on two wheels or feet just to push the envelope of familiarity.

Today I remembered again how Managua taught me that. In 1999 it was a city without street names or maps whose version of cardinal directions was arriba, abajo, al sur, al lago. My address was: from the rotunda santo domingo, 5 blocks south, 2.5 blocks down. That narrowed it down to a choice of 4 front doors, so to find me you still had to traipse around. With decreasingly bad Spanish, I wandered in expanding circles for months. I remember risking a new bus route, landing in graffiti-covered revolutionary fortress of Leon. Forgotten Sandinista solidarity came alive through those who helped me navigate that day, and I was high on that history for a week. Months later I got as far as San Salvador, and again lost my mind in joy as hair-trigger street-smarts arose in me to cover for a ballooning of the boundaries of the self.

This month, the cranial-sacral work has expanded in a similar shape, but along an internal dimension. Using as much of the body’s mind as possible to feel out unknown worlds. Every evening I returned to the instruction I’ve been given: forget what you know. Go and listen to as many cerebro-spinal rhythms as you can.

Meditate on the tides of the central channel until something meditates you back.

I see now that, every year in Mysore, I have put awe on the schedule in the evenings. Subconsciously I have been nourishing myself with regular rapture, entraining certain rhythms of hormone secretion and nervous system activity. I may claim that the cranial work is a practical retirement plan for the decades after drop-backs, but what actually draws me in is its portal to the deep unknown. For better or worse, I’m in it for the awe.

As I become less clumsy (Thank you, so much, those of you who put up with me the first weeks), increasingly people say the work makes them feel ALIVE. But you’re doing nothing. Intending nothing. Just putting your head in somebody’s hands. How is this a thing? I thought it took more hassle and equipment to get ALIVE.

Do you know the dreams where you have no body? In REM, the self that yoga calls your dream body runs and flies and interacts with some sort of a world. But in states of consciousness between waking and dreaming and dreamless sleep I suspect we drop, bodiless, into primordial space. Just a churning of color and light and feeling and sound, with maybe an archetype or an insight floating by. The cranial work drifts into these selfless spaces that change you, maybe a little bit like psychotropics change you but without drugs’ load on the system. It is a straight-laced shamanism.

I can’t believe the west has been able to produce such a method. Western mind drives us to reduce experience to material – and mind to brain, and path to goals, and friendship to association, and Ashtanga to posture-acquisition. But the cranial paradigm calls itself “a teaching in liquid light.” God that sounds ridiculous, but it’s true.

Map-mind is about materialism, and it’s about control. I love maps – google for geography, Vishuddhimaga and such for Gautama-style enlightenment, the eight-limbed path for yoga. Logic is my comfort food.

But what if too much instruction gets in the way? Every AYI conference this month, we got this hot tip: do not read the asana books, do not watch the videos, do not do extra homework. Just bring fine tuned awareness to your daily practice.

I take this as instruction to get more interested in my own experience. Quit trying to master the system; then quit believing there is a system to master. If you want to go deep with a practice, or a place, or a person, don’t try to figure them out. Get a little lost in it, in them. Be moved.

Not because analysis is bad. Because our drive to control, and to know, and to pursue goals, can take us out of the body that is consciousness itself.

Late February I took some mental health days at the Hotel Formerly Known As Southern Star. The Regaalis, with its saturated colors and even more saturated finger chips, oasis border of coconut palms, and photogenic blue striped towels. Welcome to 1965. Those afternoons I read Joan Didion against Allan Silver – two midcentury minds who always meant to speak to the future.

Didion is known for starchy double-breasted sentences that are always in fashion, but what holds me to the woman is her clean cold read on The Dream. In her case, it’s usually the Dream of the American west, or political liberation – any invisible, driving myth that people lean on to order their actions and feel less alone in the world. She writes of “…the revelation that the dream was teaching the dreamers how to live.” Mysore Magic is not so different, especially seen from the pool.

Silver takes apart reality from another angle. He’s an unknown sociologist who died in the fall fall at age 85, after a trip to the Opera. One big thing he did was advise my husband the Editor’s adviser (who is, in turn, an intellectual hero to me and many others). Silver was memorialized as a generous and life-changing teacher; his ability to live out these values despite working in the Ivy League forged a lineage the Editor now inherits. So when he died I wanted to know: this man quietly shaped my life for the good, but why didn’t his research leave a mark?

Reading it now, I see why. Turns out he worked on something that’s not supposed to exist – the sociology of friendship. Seen from above (where sociologists sit when they survey society), friendship is just association. It is transactional. Friendship is a means of accumulating status and opportunities, and for ratcheting position through the exchange of favors. “I scratch your back, you scratch mine.” But a half-century before social media took fake friendship to a whole new level, Silver identified a different, subversive type of friendship that was becoming more radical as capitalist competition pushed its way more deeply into social life.

He said this other form of friendship wasn’t about getting anything. Such “non-instrumental” relationship emerged, he claimed, through expression of feeling, intimacy, and personal disclosure. So, it is being real with people who have nothing to offer you in terms of social or economic opportunities. It is a deliberate disregard for social positioning, because the relationships of substance are just those in which mutual listening can happen. And those can happen anywhere. It is seeing everyone as having equal worth, while also developing the skill to discern when someone is approaching you for instrumental reasons. It’s an immunity to users.

Silver’s teaching is that intimate friendship is subversive because it pushes back hard against humans’ tendency to use each other. Capitalism taken to extremes can dehumanize us by training us to see each other as objects, or as means to get what we want: if we can’t see through capitalism, it breeds habits and values that eat our souls. But when relationship is an end in itself, and pursuit of personal gain drops away, we claim a kind of dignity through being real to each other. How badass.

And how true to my experience of fictive kin in Mysore. We teachers are off duty here. The boundaries we must maintain for our students back home can soften. We do self-disclosure; we express emotions; we experience intimacy to the degree that roles and personae drop away.

For those who run a Mysore program, retreat practice may be intensive, but the real discipline ramps up when we leave. The self that engages in many friendships will drop away, and we will fuel our teaching from a quiet, hard-working place.

Teaching yoga may be good and true and beautiful, but the real shit is not glamorous. Nope. You don’t get to decorate your ego with it. It is about discipline, renunciation, intensity, and clarity of action. Often students say to me that they want my lifestyle. I doubt it. You want to have a social life, to eat what you like, to sleep at normal times, to take personal days.

Teaching is awesome, if and when you turn into a person who can enjoy long periods of austerity without being a hero or a masochist about it (these are second-order strategies for decorating the ego). If you turn into a person who can really get your kicks off the wellbeing of others, without much expressing that excitement or taking it personally. If by accident that transformation happens, ok. Then the teaching life doesn’t feel like one of deprivation, but of just another expansion of your street smarts, and the outer edges of the self.