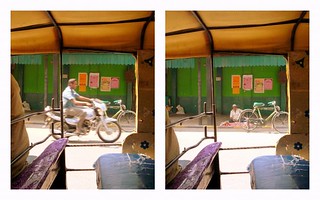 Now it’s first month healing; second month flying; third month get back to teaching already. Mysore warps time eight ways from Sunday. January was uneventful and life changing, and it is and was like this…

Settle in. Create space around and inside the body. Create sanctuary. Then go far inside yourself for half a month: take pancha karma, sit on a cushion all afternoon, sleep 10 hours at night. Wash the doors of perception in tears, coconut water and on a good day a little sweat. Mysore is for healing.

My discursive mind would shut down for days, so I’d bring it back by writing emotions and body sensations in a notebook. Emptying, then excavating further down. I’m usually not this good at spacing out, but that’s where the big steel cups of ghee come in. After practice I’d sit in a puja room with a doctor, taking sacrament. They supervise because you’re expected to recoil from the medicine – one doc actually gagged, watching me quaff it like chai and savor the rich film it left on my teeth.

In the shala, a week of primary and one of intermediate. My teacher noting the effects of the last 10 months’ teaching in my body. I’m learning to rebalance more quickly, learning to work efficiently without getting hurt.

There are big changes this year in the room at the center of my universe. One: a cheap microphone for led class that shorts out when he’s at the edge of the room. His voice becomes a bioelectric, alien chitter, and I think of the movie Predator. Good sound effects to get me into primal primary series as if I’m a big cat. Two: forgiving fake wood floors, porous and bright. They sharpen the light, so I’ve been training my lower eyelid to narrow my driste back into soft filter. Three: More stillness in the room. Everyone mentions it. The students are younger and far more diverse, but the collective is more prepared. Gokulam is still the most vata-crazed place, but the room, no. I never imagined we could feel so stable while floating in the vortex.

Pancha karma zeroed in on my emotional body, and with that catharsis as backdrop I remembered the Ashtanga practice is so unapologetically physical. For now it is hot-blodded unstoppable stalking of the mind, down to the level of the cells. No, acutally into the DNA, making conscious the habitus I have inherited. The physicality of Primary here makes me feel a sort of silent growl in my belly, and my nose scrunches up like something on the prowl. Sometimes at home, moving for work much of the day, I forget that practice with a body, in three dimensions, can be so heavily satisfying. (There is such clarity that comes from anchoring so-called spirituality in space and time.)

January evenings, I learned to do puja for Ganesh, the same way a kid might learn. It’s not so fearsome in the tantric register: the entities do not curse any missteps. To finish you say: I do not know what errors there may be in my devotion or my ritual, but if errors there be, please forgive me.

After ten hour sleeps, I’d get up in the morning and pray. As of this sentence, this is no longer something I’m embarrassed to admit. Prayer is directionless, objectless.

It is peaceful protest in a culture that is spiritually repressed. It’s just a sort of dropping of the sense of self, and then listening out as far as I can in every direction. No questions, and no requests. I do it because it makes me more tolerable in the world, and makes the world friendly. In recent years, doing this in the morning has reformatted my consciousness in one clear way: it causes me to perceive experience with wonderment and respect. Wonderment for even the terrible parts of reality. Respect for anything, everything, that has the audacity to exist.

I suspect the wonderment is just my emotional body’s trick for opening the inside of my head. It’s like there’s a pathway along the top end of the spine before it knobs on to the skull, and the attic doors are getting blown off the way they do when you lift your gaze to the sky (or just to some cathedral ceiling). The soft palate domes up like a hidden room, and when I remember that the empty space is awesome, I stop needing anything. When there is a lot of work to do in the world, then I don’t hang out as much in this head-space. But for now, I feel it’s important to spend as much time there as possible and let it have its way with me.

Three new thoughts tonight, as January ends. On my relationships with identity, mind, and time.

First, it feels healthy to drop out of the teaching role. To bracket as many identities as possible, and give the inner machinery of selfing a rest. I may teach for decades ahead, and retreat time sustains that on every level. Having a self can drain a lot of energy if I’m too serious about it. This down time will show me things, and replenish my creativity.

Second, more than ever I see the arbitrary nature of my mind. I came in with particular habits of mind the same way I got a particular size of shoe. And personalities are all so different – the hidden programming, the dream lives, the random things we THINK we must do to be okay. A long time ago I got the tools to investigate the mind, but there is also just a need to nourish it. Meet its needs for silence and a little structure, for relationship and creation. Care for it like one cares for the body. Clear the doors of perception at times, and learn that the majority of thinking and dreaming is epiphenomenal of eating and sleeping. Train the mind to a very high level… and know that one day it will also decay.

Last, a new question has come to the fore and I don’t think it’s going away. Because it points to our zeitgeist, and a set of invisible obstacles between modern life and yoga. The question is how do we as a species experience the relationship of time and technology? Specifically: how are we as a species trying to become immortal through the internet, and how might our compulsions in this space limit our ability to train the mind? My brother has been asking about the internet, time, and primal energy for ten years, but it’s taken me until now to get clear on it. What is our relationship of time and technology, and how can we make this ultra conscious in the service of sincere practice? Maybe it is coming time for me to dish about falling victim to a brief and dehumanizing internet addiction ten years ago, before social media was even a thing.

So in Ashtanga for now I am stalking the mind. Mapping the hold-outs of self in the body. What they call strong determination is involved. There is a time for these things.

Asanas just shed light within the system. That’s why it doesn’t matter what practice looks like, how flexible it is, or if I fall down. No extremes of strength or flexibility will zero the ego. Just the opposite, if we are not careful. It’s just research, conditioning, and insight into what the mind does under pressure.

But then… for the last two weeks and the next four, the evenings are something else. I’m beginning to practice cranial-sacral therapy on my own. Making space for consciousness to play inside and around the body. After two years of training I have no idea how this brilliant method even begins to work. It is too vast. Which is fine, because the central tenant of the therapeutic technique is Don’t DO Anything. My cranial teacher says “come into relationship with the system,” and then back up. Let the recipient’s system decide where to go in the field of consciousness, and what tensions, or force vectors, or old ideas it may want to release. The ground of the cranial-sacral method is mystic osteopathy. It is an entry point in the mysteries of the cerebro-spinal fluid, the empty space within the body, and the evolution of consciousness. The effectiveness of it got me interested, but the intrigue draws me in.

At 4:30 each night there is a knock on my door, and it’s always someone sensitive and funny and good – one of the hundred people here I can connect with in a moment. Mysore is brilliant for this: for long time friends who help me make sense of my life. Our nervous systems have been conditioned in the same energy for so long, and we’ve faced ourselves over years in ways it wouldn’t make sense to explain in words. We are loaners, but when we are here we get to remember there are others just the same. There is such recognition and enjoyment in these relationships.

So every night at golden hour, I come into relationship with one of these nervous systems. We take an hour of silent practice, me just sitting there sensing the cerebrospinal rhythm in my hands while they tour any number of rarified states of consciousness. The neighborhood kids play soccer in the street, and the light in the room goes from deep yellow to dark as we move into kapha time. Later I light a candle and bring water, and maybe my friend feels like telling me where they have been.

Each one of these encounters educates my own nervous system like nothing else. These people have incredibly refined and integrated mindbodies. It is joy to go along with them when it is time to play.